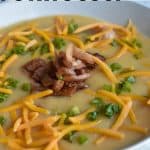 All the savory goodness of a loaded baked potato, but in a warm, creamy soup that the whole family will love. Learn how to make this amazing Instant Pot Loaded Baked Potato Soup with this easy 30 minute recipe.

What is Loaded Baked Potato Soup?

Take all the flavors that make a loaded potato great - a seasoned baked potato with chives, onion, garlic butter, bacon and cheese - and make it in soup form! By boiling our potatoes - or in this case, pressure cooking them, we can create a warm, rich creamy soup that has all the great flavor of a loaded baked potato.

In our version, we use the Instant Pot (affiliate) to make ours in a synch. Simply saute our base veggies, dump in the rest and let the Instant Pot cook it to perfection in just 10 minutes. A quick puree and stir and you're ready to eat.

Why you'll love this recipe

If you were to make this on the stovetop, you'd be hard pressed to make it beginning to end on a weeknight. But with the Instant Pot (affiliate), you can do just that in well under an hour. Simply chop your veggies, give them a quick Saute and let the Instant Pot work it's magic to bring this to perfection.

As a family, we love this because simply blending the cooked soup really lends to a nice, rich creaminess that's absolutely full of flavor. Oh, and we get to throw in some bacon? Yep, sign me up.

As far as ingredients, you'll need:

How to use an Instant Pot

Before you start this recipe, make sure you are familiar with the instructions and safety manual for your model of Instant Pot (or other pressure cooker). Instant Pot itself offers a nice set of videos on How to use an Instant Pot.

While pressure cookers are awesome tools, they have to be used correctly. Take the time to be familiar with how to use yours before you begin to avoid injury and give you the tastiest results.

Step 2: After about 3 minutes, until they begin to soften. At that point, season them with a pinch of salt and pepper. [Chef's Tip: veggies take seasoning best right when they begin to soften]. Toss in diced garlic cloves and cook for one minute more (until you can begin to smell the garlic).

Step 3: Add in cubed potatoes, chicken broth, and milk. Make sure potatoes have been peeled and cut into about ½ inch cubes. This will give us the creamiest result.

Cancel the Saute mode on the Instant Pot, then set it to Manual: High pressure for 10 minutes. Make sure vent is set to "sealing" and allow to cook.

Step 4: When timer goes off, perform a quick release by flipping the valve on top to "venting". You may want to cover the valve with a paper towel to help catch any broth that could spew out the top as steam releases. When the pressure is released and the indicator has gone down, carefully remove the lid.

Using an immersion blender (affiliate), blend the soup until only a few potato chunks remain. It should be mostly creamy at this point.

Finishing Touches Ladle into individual bowl and garnish with fresh chives, and a pinch of reserved bacon, cheddar cheese, chopped fresh chives and a dollop of sour cream. Serve immediately and enjoy!

All of those go great with Everything Dinner Rolls served on the side. 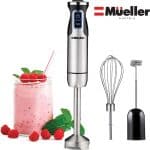